Advanced driver assistance systems (ADAS), we have worked on most variants of these systems and it has become a big part of what we do at Autotest. ADAS sensors in general need calibrating after various procedures. Predominantly we see body work removal or interference with geometry as main reasons for vehicles needing autonomous driving (AD) sensors calibrated.

Having a warning message displayed on the instrument cluster reading “radar signal blocked” is sometimes not as obvious as stated and many things can cause this message to display. If the radar is not seated in position correctly or the bracket is bent (usually after an impact) the radar will be facing the floor and will register as obstructed.

The vehicle in the image attached came to us after accident repairs to the front bumper for ACC radar calibration. This radar is calibrated dynamically, which means putting the radar into a calibration mode and driving the vehicle. The first calibration attempt failed so we removed the radar cover on the lower front grill to inspect the radar unit itself. Revealing an obvious blockage, incorrectly fitted headlamp washer pipes directly in front of the radar.

After moving the obstruction and re-calibrating the radar calibration was successful. 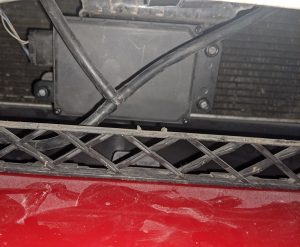